Looking at Identity from the Center

A Liberal Opinion from Mark Lilla 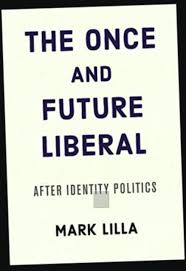 “…the most profound and potentially most radical politics come directly out of our own identity, as opposed to working to end somebody else’ oppression.” —from the Combahee River Collective Statement, 1977

“anything achieved through movement politics can be undone through institutional politics.”—Mark Lilla, The Once and Future Liberal

Once upon a time in recent history, someone altered the quotation  “All politics is local,” reportedly said by former Speaker of the U. S. House of Representatives Tip O’Neill, to fit a blossoming cultural trend and controversial niche of higher educational study and curricula to “All politics is identity politics” (and its corollary “all politics is personal”), which has proven to be, at the very least, a fail proof title for bloggers and journalists under which to express their own two cents worth on the subject. A few examples can be seen here, there, and everywhere. One ambitious writer even tries stirring interest with its antithesis yonder.

Mark Lilla, author of last year’s much-discussed book The Once and Future Liberal (HarperCollins, 2017, Kindle Edition) is Professor of the Humanities at Columbia University and a dyed-in-the-wool liberal, and has written other books about political philosophy and history, including The Stillborn God, The Shipwrecked Mind, and The Reckless Mind. The oddly simplistic titles of the books, along with a lucid and straightforward writing style belie his  thorough understanding of the history of ideas of politics. In this book he takes a position that is usually associated with the thinking of both those farther left of liberalism and farther right at the same time, those which challenge the idea that identity politics is true politics in the first place; a paradox that I’ll try to illuminate later.

He sets up his premise looking at twentieth century U. S. history based on two different and opposing grand political themes—which he calls “dispensations,” borrowing from the theological term meaning, loosely, “ divine ordering of the world”—named for their association with the presidents that inspired them and became recognized as the guru of each. The Roosevelt dispensation began with the New Deal escape from the Great Depression and excesses of monopoly capitalists, and continued through the defeat of fascism, the civil rights movement—up to the Great Society days of Johnson. It “pictured an American where citizens were involved in a collective enterprise to guard one another against risk, hardship, and the denial of human rights.” and could be tagged with words like solidarity, opportunity,  and public duty. The Reagan Dispensation “pictured a more individualistic America, where families…and businesses would flourish once freed from the shackles of the state,” with watchwords like self-reliance and minimal government. The early 1970s is generally accepted as the time the transition began, culminating in 1980 with the election of Ronald Reagan. Lilla’s ultimate message is to emphasize party politics over movement and identity politics as the only successful way to achieve progress, but  that about this time,  democrats abdicated power to the Republican Party by not following this prescription. The New Left of the 1960s spawned  issue-based movements that helped bring about progressive change, writes Lilla, but did nothing to contribute to the unification of the Democratic Party and develop a liberal vision of America’s shared future.  Remnants of the New Left were left scattered following their attempt at a radical transformation of American society. Scattered, but not forgotten: many of the group, now with degrees, returned to campuses as instructors or activist hangers-on and “turned the university into a pseudo-political theater for the staging of operas and melodramas” which, “generated enormous controversy about tenured radicals, the culture wars, and political correctness.”  On the other side, however, Republicans were spreading out across the country through small towns, rural counties, and big cities participating in “real” politics by getting people elected to offices of magistrates to judges to governors, where the power for change really rests.
Enter Reaganism—the new vision of bootstrapping one’s way to success if only big government would get out of the way was presented in 3D and replayed through political campaigns and commercial media. The economic lull of stagflation after the post-war boom years and flattening  wages was blamed in whole or part on big government with its proliferation of welfare and social aid programs, byzantine bureaucracy, and appetite for war (even if was about Communism). The vision of the newly empowered individual speaking true to the power of the monolithic state swept Republicans into the driver’s seat in statehouses, federal offices, and the Presidency. And this is the paradox: another form of individualism was populating our campuses and writing policy in the Democratic playbook. That form being self-definition, construction of personal brands, self-regard, and training students to become “spelunkers of their personal identities. Reaganism for lefties, Lilla calls it. We now had two identitarian groups; one of wallet-watchers and the other of navel-gazers, neither concerned much about the concepts of reciprocal rights and duties, civic responsibility as a virtue, a common vision for the future, or the priority of citizenship over group or personal identity. (Sam Harris claims we deny the common rationality shared by humans.) The conservatives are correct in saying that liberals run academia, but fail to see that it works in their own favor, since collegiate identity politics has a fragmenting, anti-political quality built in, which  should affirm that the Republican has no need to feel threatened or challenged for power, at least from those quarters. The left identitarians create their own problem, with the backlash from white supremacists gaining a renewed feeling of empowerment—courtesy of the student body’s lead that it was now okay for everyone to get along with expressing their own identity.
Some reviewers of The Once and Future Liberal see it as more of a polemic than a scholarly social analysis, filled with over-simplifications, stereotypes, and buzzwords. Lilla himself admits to being “harsh” in his criticism of the phenomenon. But often it takes a rousing polemic to refresh interest in a topic that has tended toward the over-analyzed and  a sameness that triggers the glaze-over-zone-out effects in readers. The feedback from writers in the national media demonstrates the controversy his book has created. Lilla’s insistence on moving on from what is now a four decades-long move from the civic-minded citizen working with others to get through troubling times and plan for the better future into today’s hyper-individualistic, atomizing, de-politicizing, and self-absorbing libertarian ideology is probably a project those who identify as humanists could agree with as project worth pursuing. Whether they would agree that working through grassroots Democratic party politics to accomplish that is another question. After all, the accusation that both major party organizations, as servants to a larger neoliberal capitalist ethos are systemically corrupting in themselves cannot be ignored. That the ethos motivated by profits alone can, in the course of one television program, promote ideal of all people of various cultures and skin colors celebrating life while enjoying their soft drink in one commercial; and in the next, offer inexpensive DNA test kits to show you just how different you are from the  folks in the previous commercial shows where the vision of the current party politics is likely focused.

So is Lilla’s solution to the problem viable? Is the problem really a problem?  Whatever the correct answers are, it is a good bet they won’t be the coming from one person, one party, or one identity group alone.