It is not coincidental to assume that Donald Trump won the presidency by chance for being an outsider. This rhetoric of him being an anti-establishment person who managed to break the system in order to win over the White House isn’t by any means realistic. In fact, Donald J. Trump is part of the traditional establishment, the elitists,  who have been running the country for decades. And, regardless of the bogus methods he used accumulate his wealth, Trump is part of the 1% that have sabotaged the system for a long-time of course by advantaging of the wealth and power he inherited from his father Fred Trump.

Trump benefited from an underestimated weapon that has been surfacing since Ronald Reagan and the emergence of religious right. This recipe that has been used by the religious right is known as Christian Nationalism, which paved the way to the Tea Party, the most conservative political movement in the modern history of the United States. This can be translated by the power of the election results in 2016 and 2018 elections.  In 2016 presidential election, Trump won the vote of the born-again Christians and Evangelicals by 81 percent and in 2018 midterm elections by 75 percent. The radical shift that the Republican base has taken since Reaganism is reflected by the irreversible social and cultural changes that have threatened the current status-quo since the Civil Rights Movement.

The fever of such change has been translated into radicalizing the political rhetoric by the Conservatives who have survived the left-leaning administration under President Obama who is mostly credited for extending the civil rights.  As a reaction, the religious right allowed anger to dominate conversations over public media platforms and is now normalized to a level that the audience is jaded to the uncivil and vile rhetoric that was long deemed incorrect in previous political eras.  Christian Nationalism isn’t a new phenomenon. Regardless of the left-leaning influence the nation has taken since the New Deal era, the United States is still by far very Christian and very homogenous in its rural parts.

The left will be facing a new phase of modern conservatism that is no longer threatened by political correctness or empathy,  or even engaged by the mainstream tools of communication to appeal to its masses.

White America is still playing the major influence in the country’s policies and elections. This privilege that always dominated the political establishment, which is characterized by the White-European heritage, is slowly vanishing by the changing demographics of the nation and, as a result, political polarization has become standardized to resist the changes that  are reshaping the country. 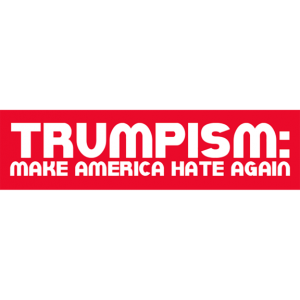 While it is too early to predict whether Trump will win re-election or not; and even if he is defeated by a classical establishment from the Democrats, his effect and influence in the political scene towards potential conservative leadership will be unprecedented. The left will be facing a new phase of modern conservatism that is no longer threatened by political correctness or empathy,  or even engaged by the mainstream tools of communication to appeal to its masses. Although winning the midterm elections in 2018 by a historic margin or 10 million votes, the Democrats will still face an aggressive beast that has redefined political leadership in Washington.

The question is not will Trump be defeated or not? The real question is: How many Trumps will be unleashed after Donald J. Trump ends his potential two terms?