How America is Slipping Towards Authoritarianism

The murder of George Floyd in Minneapolis was just a symptom of a problem that America has and was one of many signals of how America has changed and how dangerous the resistance to that change has become. The dangerous part? The American right is showing increasing signs of tolerating authoritarianism with the involvement of police and federal officers to shut down all demonstrations that were the biggest since the Civil Rights Movement in 1964.

The Republican party has gradually evolved from the center-right conservative party that was revived under Ronald Reagan to a right-wing political movement that revolves around ideological beliefs that debunk science and normalize the spread of misinformation and conspiracy theories. These practices are very well known among authoritarian dictatorships and kleptocracies such as China, Russia and North Korea. Changing demographics are key factors of the reason why such drastic shifts took place between the political party establishments on the  two extremes of the political aisle. NBC news released a study back in 2018 prior to midterm elections showing the increase of intolerance and the rising support of single party rule. 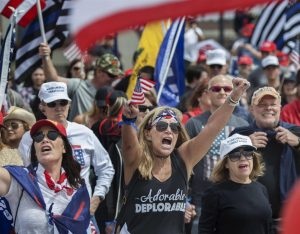 Conservatives are referring—accurately— to the GOP as Trump’s party and that he is exempt from everything related to congressional checks and balances which are a major pillar in American democracy. The Republicans gave Trump an excuse for every legally and ethically questionable action he has taken. The Russian hijinx was justified; Jeffery Epstein, justified; and commuting Roger Stone’s sentence  has also been justified because he is the president. Just because he has the power to do it.

Trump is the conservative’s wet dream when he became the first Commander in Chief to promote anti-scientific rhetoric that led to the catastrophic mismanagement of the ongoing COVID-19 pandemic. It is super important to mention that the toxification of American politics has been primarily influenced by the church and the Christian right that doesn’t believe in a pacifist God that rules with mercy. The response to the pandemic has shown alarming signs that American authoritarianism has been on the rise since Obama took office. When white men with assault weapons invaded the capital hill in Michigan and send murder threats to Governor Whitmer due to the lockdown order wasn’t an issue for them. The reason? Whitmer was a socialist, Marxist, and communist leader who was stripping people from their liberty—therefore the show of  guns was  a  proper potential form of mitigation of any government brutality. Now let’s take the same scenario under a different context. Chicago and Portland are two major economic powerhouses that had unstoppable protests against police brutality for over 50 days. But what’s the difference? Chicago and Portland are major metropolitan liberal areas in liberal states that despise Trump. And what was the response? Federal agents in unmarked vehicles from the National Guard and Homeland Security were sent by an order from the Oval Office to curb the demonstrations.

Trump invoked a very divisive tone against the protestors with his infamous name-calling strategy. He described them as un-American anarchists, traitors, and looters. He even regurgitated the cruel and repressive phrase first used by Miami’s Chief of Police in 1967 “When the looting starts, the shooting starts” as the protests grew around the removal of Confederate statues.  Even Attorney General  Bill Barr once described the protestors as foreign agents who are infiltrating the public and causing chaos. The tone of alienation and demonization is an effective tactic used by many autocratic leaders to silence critics.

Also, with the signing of the Religious Freedom Restoration Act, conservatives now have uncovered unlimited resources and support from the deferral government that will help them use religious rhetoric in employment and education. This will impose further discrimination since religion will be used against communities in exchange for goods and services. 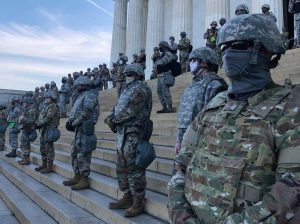 The glaringly obvious question: how did   American turn into this? Is American exceptionalism an illusion that only time has proven to be true and unrealistic? The number of fragile democracies in the world is increasing and the countries with authoritarian ruling by monarchs and theocrats are gaining momentum due to economic growth and increasing political influence.

Americans must learn that rights once taken for granted will be stripped away, and once taken away, there can likely be no getting them back, and expressions of regret will ring hollow.

reporting for The Humanist Perspective