Getting Started— Learning by LEGO

The following is the third in a series about the experiences of NOSHA member Robert Wilfong in his quest to introduce the LEGO teaching curriculum in a school in Bamako, Mali. He plans to update his progress and personal thoughts about the program as time permits. Here are reports from the earliest sessions, along with some observations about the Malian culture.

Seydou and I launched the Mali LEGO Project in his children’s school yesterday. Two groups (five girls and five boys, which quickly became eleven girls and eight boys) got an introduction to LEGOS, with hands-on assembly experience using the LEGO drawings.

We will do two sessions a week, with increasingly complex sets leading up to the LEGO robotics program, SPIKE PRIME, using powered sets controlled by a computer program.

The second session of Mali LEGOS in the schools happened yesterday. After the very successful first session I knew I had to prepare for more students. There had been several children sobbing uncontrollably after the first session because they had arrived too late to participate. And Papi and Mami said there had been many children asking them when the program would happen again. Accordingly, I planned for four groups of children instead of two.

Seydou and I went to the furniture maker near his house and ordered four work trays large enough to hold the instruction booklet for a set, the raw pieces, and the work in progress, with a 5 cm (2 inch) edge to keep pieces from flying away and getting lost. My great fear is losing pieces. I have some duplicates of basic bricks, but there are often specialized pieces that can’t be replaced. Lose one and a whole set is disabled. And the nearest LEGO store is 3,200 km (2,000 miles) away, across the Sahara in Spain.

The trays were delivered in plenty of time, and yesterday I set out to Seydou’s to pick up him, Mami, Papi, and the trays in order to arrive at the school by 3 pm. I was negotiating mid-day Bamako traffic (donkey carts, Sotramas, kamikaze motos, pedestrians and military trucks with mounted machine guns) when my phone rang. It was Seydou. His morning task had been delayed due to a power outage, so I was to continue to his place, pick up Mami and Papi, and go do the session by myself. Without language support. Without authority support. Just me, the kids, the LEGOS, and my feeble français. No problem.

Trying not to panic, I remembered that I had done similar LEGO sessions in the village by myself with children who don’t even speak French, with no authority support in an environment where that is more of an issue than it would be at the school.

I should probably explain the issue of authority support. Language support is an obvious concept, but authority support is not. I don’t know enough about Malian child-raising culture to explain this, so I will just share what I have noticed. If a Malian adult tells a child or group of children to do something or stop doing something, they comply immediately. They don’t argue. They don’t do anything passive-aggressive. They do or don’t do what they are told. Always. I have never seen an exception to this rule.

What fascinates me about this is that the adult tells them once, doesn’t raise their voice, threaten or intimidate in any way that I can see, simply states the case and the children do as they are told. It seems that they MUST do this. They are programmed to do it at a very deep level. Defiance, even foot-dragging, is not an option.

To me, this is genuine authority.

But if the children HAVE to do what a Malian adult tells them to do, they DON’T have to do what I tell them to do. I don’t have that same authority. Why?  I guess it is because I am not an official representative of the Malian culture, and the children know it. So if I am trying to do an organized, structured activity with a group of children, it is a huge help to have authority support as well as language support.

I was mulling over these issues as I continued to Seydou’s. The authority issue would probably not be as serious in the school as it would be elsewhere, because that is such an authority-rich environment to begin with. And the school director will be there if I need help. And Papi and Mami know me well enough that we could probably set up the expanded session and still be successful.

And in fact, that is the way it worked out. Managing four groups instead of two was a lot more work, of course, and this time I had to deal with groups at different levels of experience, an issue that is only going to increase as time goes on. But it did work out. The beginners got their introduction. The more experienced children moved on to more complex sets. And I am already starting to think about the problem of introducing powered sets controlled by a computer program, aka, robotics. That will present a whole new world of management issues. I am expecting the robots to bring LEGOMANIA to a fever pitch. But we shall see. 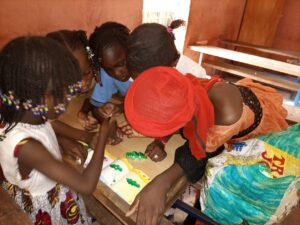 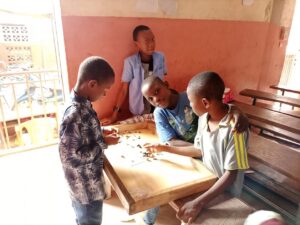 The third session of the Mali LEGO Project in the school. Already LEGOMANIA is threatening to swamp the program. In the first session there were initially eight children in two groups, which  grew to seventeen by the end of the afternoon.

In the second session there were four groups of children numbering about twenty (I was too busy to count).

This time Seydou had returned, and Madame Dembélé and the guardian, M. Diallo, were helping, and I definitely counted twenty-three children working in four groups.

This is manageable so far, where we are assembling basic and intermediate sets according to the LEGO drawings, but I don’t know how  I will make the transition to powered sets controlled by a computer program. Once they see the set moving by remote control, and once they see that they can modify the movement on the laptop, it’s hard to believe that anyone will be content to continue stacking bricks according to the drawing.

And I only have one robotics set and only one laptop to run the coding program. There is no way twenty-three children can be working on this at the same time, and I don’t think they will get much from watching.

But one of the first things I learned about Mali is that life is about making connections and finding solutions. Also that of the four great Malian virtues (courage, seriousness, simplicity, and kindness) the first is courage. We will stay with it until we find a solution.

The Mali LEGO Project continues to be overwhelmed by its own success. The original plan was to have two groups, one of four boys and the other of four girls, each led by one of Seydou’s children, who are experienced LEGO assemblers. Today we had four groups, two of boys and two of girls, each with six to ten members.

I am pleased with the enthusiasm, but the groups are too large. LEGOS are very much a hands-on activity. You learn five times as much by doing as by watching. And the children have rapidly made progress, so now we are assembling much more complex sets, such as the 3 in 1 series.

I like 3 in 1 a lot for several reasons. The same set of pieces can make three related but noticeably different sets. This teaches a valuable lesson, I think; namely, that by reconfiguring components one can reach a noticeably different result. This reinforces the general LEGO lesson that manufactured things are not mysterious black boxes, but rather collections of components that are assembled in different ways for different purposes. This is Engineering 101.

I think tomorrow we need to re-organize. In the first two sessions the children were assembling basic sets in 7-12 steps. One child would do the whole thing, then disassemble it and pass it to the next child. That worked well enough. But the more elaborate 3 in 1 sets often have more than 50 steps. I think we will have to break down the assembly into stages. The first child does steps 1-10, the next 11-20 and so one. Then when the assembly is complete, we will disassemble it and start again with a different child doing 1-10, 11-20, etc.

I gave the group a pep talk before we began, told them that they were pioneers, doing something few if any Malian children have ever done before. I told them that if they work with LEGOS long enough they will begin to think like LEGO designers and create their own designs, which LEGO understands and encourages.

I told them that we would soon begin the robotics program. I told them about the international robotics competitions of the First LEGO League, and how they might some day travel internationally to compete in this program. They looked polite but bored.

I remembered feeling exactly the way they looked when I was their age and some grownup was droning on and on about some nonsense that was just getting in the way of something I wanted to do.

Then we broke into groups and started to work. They already have good work habits. I only had to tell them to begin by separating the pieces by color on the first day, and they all have taken it to heart. They automatically begin that way, which makes it much easier to find the next piece and encourages a more systematic approach to the tasks.

So we will continue, going from challenge to challenge, the ultimate one being the start of the robotics. This will be a quantum leap forward, to computer-controlled powered sets that move and do different tasks. But I only have one robotics set, so only a very small group can be working on that at one time. I don’t know how I am going to handle that challenge, but courage, as the Malians always say in the face of a challenge. Courage. 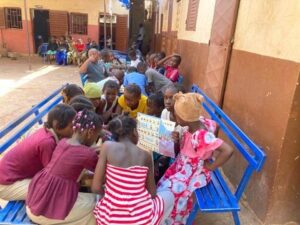 The Legos project with Mr.Robert and the kids at my children school “LA BELLE TANTI NANA” is moving forward. Today we did some more advanced level legos which some kids easily picked up. We can see the impact of it on the kids learning skills.

Hopefully some of these kids will attend the international Levi’s competitions one day, thanks to Mr. Robert.
Thanks lot Mr.Robert Wilfong—Seydou Dembélé