From Here to Bamako: Report from a Hometown Humanist 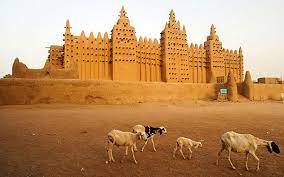 Some 400 miles southwest of Timbuktu—a place which may stir the imagination and conjure up a fantasy of a mystical, unknown and remote place somewhere at the Earth’s end—is Bamako, the capital of Mali in western Africa. The large, linear semi-arid geographical area the width Africa known as the Sahel, just south of the Great Sahara desert where Bamako lies would itself seem  faraway and exotically foreign to many in North America. Even with a population of about 2.5 million, it is not among the most populated cities in western Africa. So what would motivate an American to plant roots there as an expatriate for months out of the year for the last 12 years?

Robert Wilfong, friend of NOSHA gave me his recollection for doing just that. After retiring from the Unite Brotherhood of Carpenters and Joiners,

I started to wander, trying to chart my next move.

After some travels in Europe and North Africa I landed in Mali in early 2012. I have played guitar off and on most of my life and was fascinated by several Malian musicians, also guitarists. I wanted that sound, and I was looking for lessons. After ten days of lessons with a young guitarist who had toured in the USA with Bony Rye (I eventually understood he was talking about Bonnie Rait) I took the bus back to Dakar (great experience. I’ll never do it again).

But would this Orphean attraction to the lyrical and upbeat songs and strings of Malian music be enough to continue coming back year after year? The humanist and humanitarian foundation, for those who hold it, seems always to prevail in the long run. In Wilfong’s example, the student becomes the teacher. He writes

Many people have a hard time understanding why I would spend so much time in one of the poorest countries in the world, when my birthright entitles me to spend all of my time in the richest. It’s not easy to explain. The fact is, I am not a mainstream guy. I sometimes describe myself as a homeless guy with an income, or an intellectual in exile. Although I am physically comfortable in the USA, I am not emotionally comfortable. Every year it gets more difficult for me to live there.

It’s just the opposite in Mali. Physically, materially, it is a difficult environment, but I feel more at home here than I do in America. I feel that the Malians have given me priceless gifts, and I am always trying to repay them. They think I am a generous white guy. I’m not, really. But I do believe in paying my bills and helping my friends when I can.

Robert has agreed to chronicle his experiences with us at The Humanist Advocate, and we will be publishing them in this column as they come in. Hopefully they can be of some inspiration for all humanists. 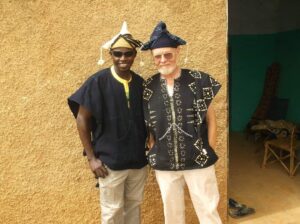 I have returned to Bamako from the United States, re-entering the utterly different world of contemporary urban West Africa. Even though this is the eighth time I have made this transition there are still surprises. I am always just scratching the surface here.

One morning a few days ago my partner, Remmy, placed a large serving of plantains on the table in front of me. I ate about half and then asked her if she was going to eat.

This did not seem fair to me, so I said, “Perhaps I should learn to bear hunger too.”

“No,” she said, I don’t want you to do that. It is not a good thing to learn. I only learned because I had to.”

So—a reminder that there is more hunger-bearing going on here than meets the eye. Here, in a major African city, where food is offered for sale everywhere, and the streets are full of restaurants and bars, hunger-bearing is a regular part of city life.

It has taken me years to begin to see this. Even though the average Malian is 20 to 30 pounds (9 to 14 kilos) lighter than the average American, it took me a long time to see this as something more than cultural difference. Hunger-bearing is an ever present fact of life.

When we are apart Remmy calls me almost every day on WhatsApp or Messenger. One of the first things she says is, “Did you eat? What did you eat?” At first I thought this was a standard greeting- Hi! how’re you doing? But now I understand that it is a real question. It is the daily hunger-bearing report. No matter how many times I explain that I am a rich American and we eat every day, she still wants to know. She worries.

Malians who are bearing hunger will NEVER say a word to you about it. If you are a guest in their house they will serve you food even if it means their family must bear hunger. If I was bearing hunger you would never hear the end of it. But Malians will laugh and joke and carry on even in the midst of hunger-bearing.

It’s a different world and not always easy, but I am glad to enter into it in the small way that I do.