NOSHA Meets in Remote Livingston Location to Learn About LIGO 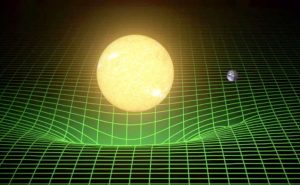 Many, if not most of the advances in the discipline of science and its utilitarian child technology have come from man’s ability to devise new ways to observe, measure and record the physical world around him—and the worlds beyond his own.

At last count, there are five space observatories in Louisiana, all but one resemble the image most visualize when hearing the term, of an igloo- or dome-shaped building with a the barrel of a telescope jutting out at an angle. It works on the very old math of focal lengths and the craft of lens making. Thanks to this measuring stick (and Galileo, of course) we know that we are not at the center of our solar system, much less the universe.

The fifth space observatory is an example of a new way to observe nature. It was conceived, designed, and constructed for the purpose of observing, unlike telescopes, phenomena that are invisible. And not only invisible, but, at the time, were only known to exist as a necessary consequence of Einstein’s Theory of General Relativity. The phenomena are gravitational waves, the ripples in spacetime proposed by the theory that undulate outward from a large celestial events.
In April, about fifty NOSHA members went on a field trip to the Laser Interferometer Gravitational Wave Observatory (LIGO) ten miles or so north of Livingston, La., for their monthly educational meeting, and got a first hand experience and tour of how it works. The LIGO operation is funded by the National Science Foundation and operated by Caltech and MIT universities, with assistance from students and staff from LSU. An identical facility is located in Hanford, Washington; the idea being that with two observatories, any errors in measurements at either location—false positives—caused by local conditions or glitches would be cancelled by the other.

In the Control Room

LIGO began taking its first measurements in 2005, and made upgrades to the facility in 2015, which included the Science Education Center, a building designed for the general public with an auditorium, classroom, pre-control room area, and exhibit hall with about 50 interactive exhibits. The NOSHA group spent time with the hands-on giant, suspended slinky, bobbing and wagging their heads following the  pendulum apparatus, trying to determine the heat source from a large concave mirror, and other exhibits while waiting for the guided part of the tour. 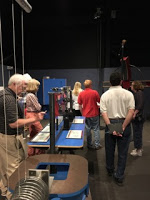 The guide walked about half of us (our group was split up due the the numbers and others outside of the group mixed in) to the main building where a short film was presented, followed by a visit to the central control room of the complex. Banks of monitors, almost floor to ceiling on three walls looked down on the three or four operators staffing the control. The operators seemed unfazed by the crunch of tourists that squeezed in the the tight space down the center aisle and around their desks and were prompted by the guide to take questions from the guide. (There always seems to be a smart ass in these open question sessions, who purposefully ask a very technical question that would possibly leave a technician without an answer, thereby showing off his own expertise on the subject. Our group had one.) One of our members commented later that this part of the tour might better be served with a more dramatized presentation of goings-on with the maze of data displayed in the monitors and work being done by the operators rather than allowing questioners wander down rabbit holes with their abstruse musings.

So how do we observe something we cannot see (or is not detectable by any of our other four basic senses)? This is possible by observing the effects the phenomenon. In the case of the LIGO observatory, two 4-kilometer arms resembling inverted concrete half-pipes radiate at a 90° angle from a common point from within which a laser beam is sent traversing through a vacuum tube and reflected back to the center by suspended ultra fine mirror.

The passage of a gravitational wave alters the length of the tubes, causing a difference in the time it takes for the beam to travel, and shows up as a slightly out of phase wave length. 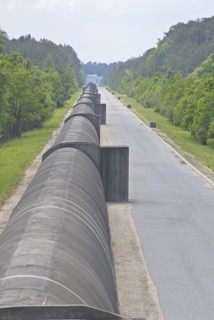 Heading toward the Vanishing Point

On September 14, 2015, such a disturbance was noted with the observatory in Livingston, and then, milliseconds later, at the Washington installation. By triangulation, the origin of the wave is determined, and the result agreed with a  previous observation of the merging of two black holes over a billion years ago. “Slightly” is a vague and greatly understated term to describe the actual measurement: the variation amount to a mere 1/1000th of the diameter of a proton was all there was on the wavelengths. The precision involved in locating the mirrors to this degree of measurement is almost incomprehensible, as well as the technology to assure that the foundations in the ground were perfectly level; the concrete base poured to offset the curvature of the Earth, which would be a significant factor for error, even over the relatively short 2.5 mile length. Another wave was observed on December 26 of the same year at both locations. One gets a feel for the sensitivity of the equipment upon entering the facility. The two-lane road is lined on both sides and down the middle with traffic cones and the posted speed limit of 10 mph about a quarter mile before arriving at the main entry and guard shack. Some restrictions on tours are in effect to minimize traffic vibrations. 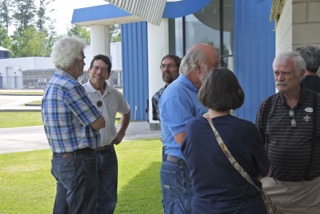 NOSHA brought a few scientists and engineers of our own!

Some philosophers of science have pointed out that in the course of building new devices for observing natural phenomena-—even though the original conception may be sound and the intentions admirable-—may have biases built into them, causing them to yield results that they were specifically designed to observe or validate. Understandably, an area where the actual phenomenon remains invisible to the human sensory apparatus, doubt about the validity of positive results can persist, even among those involved in the project. Einstein himself waffled on his own idea, at least once publicly doubting the existence of the gravitational waves. But to Rainer Weiss, who by 1972 had drawn up a design for these long-armed “antennae” as a way to catch lightning in a bottle, a Nobel Prize may soon be on its way, and the burden of disproof remains on the skeptics.

Thanks to Charlotte for putting this together and everyone who helped with the carpooling!