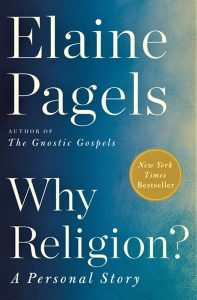 When I first noticed Elaine Pagels’ recent book Why Religion? A Personal Story, I anticipated a scholarly analysis of what motivated humans to hold religious beliefs or engage in religious practices. I could not have been more wrong. This book is intensely personal, subjective, and emotional. Perhaps I should not have been so surprised. Religion is, after all, something personal, subjective, and emotional.

Dr. Pagels is a professor of religion at Princeton University, and a scholar of Gnostic literature, works long branded as heretical by mainstream Christians. She’s written half-a-dozen books including Adam, Eve, and the Serpent: Sex and Politics in Early Christianity, and a bestseller titled The Gnostic Gospels. She’s appeared in television documentaries, is a frequent guest lecturer, and has won numerous academic awards, including a MacArthur Fellowship, commonly known as the “Genius Grant.” She has certainly established herself as a rigorous academic who approaches her chosen field scientifically, analytically, and historically.

In Why Religion? Pagels takes a radically different approach. Here she reveals her personal experiences with the metaphorical and transpersonal. She describes shattering tragedies that altered the trajectory of her adult life. She lays bare her inner struggles to manage grief, guilt and rage. And in the process she describes how she found comfort and perhaps guidance in ritual, in the symbolism of Job and the devil, and in the silence of meditation. Her process takes years, but in the end she concludes that “however it happens, sometimes hearts do heal, through what I can only call grace.”

Pagels makes no claims about faith or doctrine. It is, in fact, not clear exactly what she does or does not believe. That is quite beside the point. The point is that we are all human, even the more intellectual among us, and so have minds that respond to myth and symbol. Whether we believe them or not, the stories we grow up with “create the cultural world” in which we live, and (she quotes anthropologist Clifford Geertz) “the work of culture is to make suffering sufferable.” Meaning “may not be something we find,” but “we might be able to create” it.