BOOK REVIEW: Religious Literacy: What Every American Needs to Know — and Doesn’t 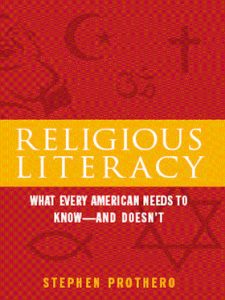 For decades secular Americans have been painfully aware of an odd American phenomenon: secularists and unbelievers tend to know a great deal more about religion in general, Christianity in particular, and the contents of the Bible, than most of our neighbors who profess a faith. In Religious Literacy: What Every American Needs to Know — and Doesn’t, author, professor of religion, and commentator Stephen Prothero tries to explain this phenomenon.

A believer himself, Prothero acknowledges that Americans talk a great deal about the Bible but almost never read it, know next to nothing about their own religions, and even less about anybody else’s. In today’s America many of us would imagine that this is due to increasing secularism, but Prothero says that is not the case. As he explains it, religious institutions in the U.S. have made a series of internal choices that have resulted in a dumbing down of their religions.

Our colonial past was quite different, Prothero claims. America’s 17th century Puritans had many problems, but ignorance of their own religion wasn’t one of them. Most of their ministers were academics in an era in which academia was heavily biblical, and unlike their modern counterparts, they preached denominational doctrine and vast portions of the Bible. The result was that regular attendees at their services had a firm grasp of their church’s doctrine, could explain how other denominations were different, and were thoroughly acquainted with the a large percentage of the Bible.

This changed as America became less Calvinist and more Evangelical, increasingly emphasizing emotional fervor over doctrinal study. By the time of the Second Great Awakening, a revival movement that swept the U.S. in the middle of the 19th century, this shift was almost complete. Preachers in that movement had more style than substance. They could induce swoons and seizures, but could not and did not educate. At the same time, different Protestant groups tried to cooperate across denominational lines in the production of teaching and missionizing materials. That required a willingness to ignore details about which denominations disagreed, and to focus instead on the subset of beliefs and interpretations they held in common. This process of watering down doctrine got worse in the second half of the 20th century, as various Christian groups tried to form alliances in a bid for political influence and power.

Prothero would like to reverse this trend by requiring more education about religion in K-12 and undergraduate university studies, in public schools. He waxes enthusiastic on this point, and his proposal probably goes further than most secular Americans would be comfortable with. In spite of this, many unbelievers would likely support a toned- down version of his plan, since many are quite certain that studying the whole Bible, not just the warm and fuzzy parts presented in most churches and church-affiliated schools today, is the best way to secularize the nation.