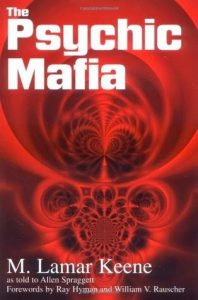 If you spend time in bookstores, and if you’re of a skeptical bent of mind, you may have noticed that books debunking one or another kind of pseudoscientific nonsense are just not very popular. You’ll find a foot or more of shelf space occupied by books about ancient extraterrestrials, but at best an inch for the books that call such stuff nonsense (Wilson’s Crash Go the Chariots is a favorite of mine). You’ll find many feet of shelf space dedicated to a variety of psychic phenomena, and again an inch, if that, for the more down-to-earth doubters (James Randi’s Flim-Flam, say).

One of those unpopular but worthy volumes is M. Lamar Keene’s The Psychic Mafia, an insider’s exposé of mediums who help the bereaved living make contact with their departed loved ones. Originally published in 1976, the book has sometimes been out of print because practical thinking just doesn’t sell. Happily, it was re-released by Prometheus Books during the 1990s, and is again easily available.

Keene’s book provides an unusual perspective, because he was not always an outsider.  He was a practicing medium for many years, a leader of various spiritualist groups, was noteworthy among his peers, and made good money at his trade. But over the years Keene developed a modicum of conscience. He gave up his lucrative psychic career, and then told his story in print.  The Psychic Mafia, then, is a confession, an admission of frauds committed and gullibility exploited.

Keene shows no respect for mediums and other practitioners of psychic arts. He explains in detail the secret files kept on clients, the dark rooms, black clothing, hidden co-conspirators, and trap doors used. He claims most other practitioners were just as crooked as he was, using similar tricks over many years, all while projecting even among themselves a false sincerity and carefully constructed plausible deniability.

Keene also shows no respect for the many clients he and other mediums bilked out of mountains of money.  In this estimation, most of his victims had such a strong desire to believe in contact with the spirit domain that they blinded themselves to ridiculously simple tricks and failed to exercise even the rudiments of skepticism. Taken in by the confidence and charisma of a successful medium, customers happily parted with their cash, and felt they were contributing to something of value.

I recommend this book for believers and doubters alike, but there are a few negatives to be mentioned. Keene (now deceased) comes across as very taken with himself, feeling superior to other psychics both for the quality of the frauds he perpetrated as a medium as well as for later developing a conscience and giving it all up.  He realizes how much some aspects of his practice resemble those of a mainstream church, but stops short of extending his accusations of fraud by that one last and logical step. Oddly, both Keene and the Reverend Rauscher, who wrote the introduction, also stop just short of calling all psychic practitioners frauds, holding on to the hope that legitimate mediums are practicing out there, somewhere, however indistinguishable they may be from the frauds.