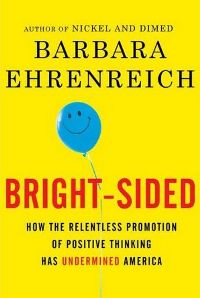 “Optimism is the opium of the people.” Milan Kundera, “The Joke”

These words, written in an atmosphere of repression in Kundera’s 1960s Yugoslavia, illustrate the central point of Barbara Ehrenreich’s 2010 book Bright Sided: that positivity can be just as, if not more dangerous, than negativity. Specifically, she takes the reader on a journey into the positive thinking movement, from its beginnings in the 19th century in response to the dour “you’re evil and gonna burn” stance of Calvinism to its role in U.S. political and economic affairs.

Ehrenreich’s inspiration for the book was her experience as a breast cancer patient, in which informational literature, support groups, and particularly other patients put forth the view that not only was being positive a key to regaining one’s health, but also the slightest negativity (say, being angry that you have cancer) would actually help the disease spread and, if you haven’t always been sunshine and roses, may have been its original cause.

The bible of the modern positive-thinking police is the 2006 book The Secret, by Rhonda Byrne. It and its imitators focus on “the law of attraction,” ie, the idea that anything can be yours by focusing your mind and visualizing it. For instance, one might “manifest wealth” by imagining that Mercedes in the driveway consistently and by believing wholeheartedly that you can make it happen, no matter whether one has an income that would support its payments. Essentially, the whole concept comes down to magical thinking: ignoring facts and shielding oneself from reality. But money and good aren’t the only areas where the law of attraction and its positive thinking brethren can be found: Ehrenreich discusses the phenomenon in a variety of areas: prosperity gospel, motivational speakers, medicine and the power of attitude, economics, etc.

Ehrenreich presents a much darker side to this magical thinking, which is among the areas where the book’s subtitle-How the Relentless Promotion of Positive Thinking Has Undermined America-really comes into play. In creating a worldview in which positive and good are interchangeable, the opposite becomes true as well: if something bad befalls you, your own negativity must have attracted it. For example, in reference to the victims of the Indian Ocean tsunami, Byrne noted that such disasters can only happen to those “on the same frequency as the event.” Poverty, therefore, is a willful failure to embrace abundance, and sickness cannot happen in those with harmonious thoughts.

Perhaps nowhere has this magical thinking been more harmful and disastrous than in the economic realm. Ehrenreich, who has written extensively on the growing gap between rich and poor and the destruction of the middle class, discusses a corporate world in which motivational speakers are brought into companies, particularly after layoffs, to “discipline a demoralized workforce” and remind the remaining employees to fake those smiles or face the same fate. (Working in an organization that recently enacted a “no venting” rule while simultaneously sponsoring a workshop on how to think positive thoughts, this one hit close to home.)

Also, she identifies the role that positive thinking played in the real estate crash of the late 2000s. Parties that included homebuyers who overextended themselves (often based on the encouragement of prosperity preachers who told them God would provide the payments for that McMansion), regulatory agencies that refused to hear any negative word about the real estate market possibly falling, and Wall Street barons who fired analysts who gave bad news even if based in reality all combined to create a financial perfect storm, based in large part on the idea that to discuss the very real possibility of a real estate downturn would in and of itself make it happen.

In her conclusion, Ehrenreich stresses that we all need not be pessimistic curmudgeons. Pointing out that skepticism has led to most human advances over the eons, she notes that the key is to apply critical thinking skills, to base our actions in reason and common sense, and to be authentic.