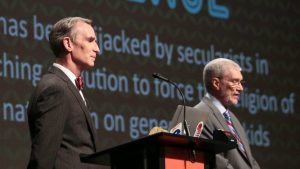 In spite of criticism from scientists and secularists, who advised that debating a creationist just gives a bully pulpit to mental defectives, February 4th’s debate between Creation Museum Director Ken Ham and “Science Guy” Bill Nye was a secular success. Nye did a good job of sticking to the facts, and although he probably went quickly above the heads of his largely creationist audience, he managed to score some key points in favor of logic and observation. Just as importantly, though, Ken Ham made a public fool of himself.

Creation “Science” and “Intelligent” Design are, of course, deliberate subterfuge. They cloak religious dogma and baseless assertions in the language and Power Point slides of science, in hopes of flying below the radar of the Establishment Clause. While many school boards and Senate Education committees are all too easily fooled, keener minds can spot the ruse in a second. But Ken Ham dispensed with all that in Tuesday’s debate. He didn’t bother to pretend at anything scientific. He plainly showed himself to be a biblical, literal, young-earth creationist and religious evangelist. In this sense, at least, he was refreshingly honest.

Ham’s main claim is that science isn’t really science if it tries to use logic and observation to infer what happened in the past. Science, he claims, can only be applied to processes observable in the here and now. Science can’t tell us the truth about the past, therefore the only way to know with certainty about the past is from an eye-witness. The only eye-witness to Creation and the Flood was the Judeo-Christian God, who conveniently ensured that some human beings accurately and reliably wrote down some of his direct observations in the Judeo-Christian Bible. Thus any supposed science that contradicts the Bible just hast to be wrong.

Those who waver in the murky waters of Creation “Science” and “Intelligent” Design, or who simply believe schools should “teach the controversy,” would do well to pay close attention to the rest of what Ham’s excess of honesty revealed. A good half of his speaking time had nothing to do with creation or science, but was pure evangelism. If people believe in Evolution, he claims, they will think they are animals, and so will behave as animals. They might even go so far as to create a nightmare world in which same-sex marriage is legal, schools teach kids that the observable universe operates according to natural laws, or women have a right to make their own reproductive decisions. Ham has here blown the cover of the prevaricators, who want to pretend that anti-evolutionists in the U.S. are anything other than fundamentalist, Protestant, Christian missionaries.

Ken Ham gets criticism from all sides. The scientifically minded decry his lack of data, lack of logic, and lack of intellectual rigor. Religious believers even slightly more mainstream than he, even televangelist Pat Robertson(!), want him to stop talking because they think he makes all believers look stupid. Anti-evolutionists of various stripes are quick to criticize wherever he disagrees with their particular brand of snake oil, whether it’s day-age creationism, old-earth creationism, human exceptionalism, irreducible complexity, or some other pseudo-scientific swampland.

But in the end, I think Ken Ham did a great service for America that Tuesday night. He reminded a very large audience that Creationism is groundless, lacking verifiable evidence, and is based entirely on an untested and a priori assumption. More importantly, he reminded us that Creationism, regardless of how it is packaged, is inextricably religious, and is invariably part of a theocratic agenda.