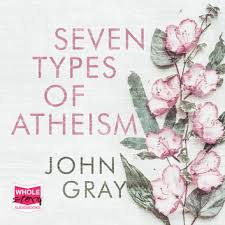 If, said I, it is sweet to refuse to do good, it must be heavenly to do evil.

“The Dark Divinity of Nature”

The writings of Dontien Alphones Francois, Marquis de Sade, from whose name we are indebted to as the origin of English words such as sadism, sadistic, and sado-masochism are filled with “descriptions of orgies….which feature highly ritualized fantasies of torture, incest, coprophagy and sexual murder,” reports John Gray to open the chapter on another of his seven types of atheism. Sade, (1740-1814) hailed from a from an aristocratic lineage dating back to the twelfth century and was “if not the first, then certainly the greatest modern prophet of misotheism—the current of thought that hates God as the enemy of humanity.” So, by Gray’s own metric, it is only natural that he would serve as a good example of his “god-hater” type of atheism. One could surely suspect that Sade hated something—if not from his writings alone, but by some of the scandals that followed his reputation (flogging an indigent widow, cutting her flesh, and then pouring hot wax into the wounds, for example; and another in which he and his manservant were condemned to death and executed in effigy for arranging and participating in a orgy in which four females where offered aphrodisiacs and—along with Sade—whipped and sodomized by the manservant), eventually  leading to his imprisonment for extended periods of his life. And, one might be perfectly within reason to suspect him of having bouts with “insanity,” and that his group debaucheries were not about sex, but cruelty.

The philosophical wrong turn that twisted the marquis’ outlook on life and led to his depraved behavior Gray surmises is this: with no gods, the natural world and all it contains becomes, from its sublimest of pleasures to the horror of its  most perverse cruelties, is all we are given in this life, and stands as the as ultimate arbiter of incontrovertible truth. “There is not a single virtue that is not necessary to Nature and conversely not a single crime which she does not need…)” Sade relates in A Dialogue Between a Priest and a Dying Man. Sade, in the voice of the dying man, tells the priest that which he wants to repent is not the sins he has committed, but “the fact that he did not commit more of them,” and regrets he “made so little use of the capacity for pleasure that Nature had given him…and wishes he had followed her commands more faithfully.”

But he confesses in his work Juliettte (1797, but not published openly in France until the early 1960s)  “…yes, I abhor Nature; and I detest her because I know her well…I have experience a kind of pleasure in copying her foul deeds…” And though he held that  “The idea of God is the sole wrong for which I cannot forgive mankind,” and while his libertine characters rebelled against God to serve “the divinity of Nature,” Gray points out that Sade has replaced one insufferable deity with another. For atheists who really leave theism behind and return to Nature, Gray opines—as the Epicureans  did—there is no problem of evil, at least evil delivered by an agent, whether the agency be “God” or Nature. Shit happens, and, for the Epicureans (and humanists), human suffering should be deserving of our compassion and not a condition that we should be trying to increase or exacerbate.

Some of us have gotten this question: Why do you hate God? If it happens to you, take a minute to reflect “WWMDSD? What would the Marquis de Sade do?”—just don’t do it; and be wary of deifying Nature.

This chapters also contains similar studies of Dostoevsky and William Empson which I have chosen to exclude, at least for the time being.

Reviewed for The Humanist Advocate
by Marty Bankson