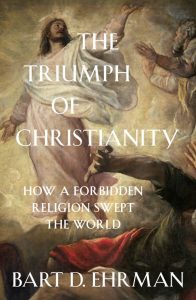 Readers interested in the early history of Christianity will enjoy historian Bart Ehrman’s latest book and bestseller, The Triumph of Christianity: How a Forbidden Religion Swept the World. The book focuses mainly on what happened, and why things happened the way the did, during the 4th century. In 301 CE, Christians were a small but visible minority within the Roman Empire, subject to persecution by decree of emperor Diocletian. By 399 Christianity was the official religion of the empire, and probably half the population practiced it. How did so dramatic a change unfold? What factors made the rise of Christianity improbable? What factors contributed to its success?

Unlike some historians, Ehrman fully accepts the conversion of Constantine the Great, Rome’s first Christian Emperor, as entirely authentic. Constantine’s edict (312 CE) tolerating all religions, and the prestige of having an emperor who was Christian, spurred on the growth of the religion. But Ehrman gives less importance to these facts than some historians do. He describes a number of factors restraining the growth of Christianity. It’s insistence on worshipping only one god, excluding all others, was quite alien to the world view of pagan Rome, which encompassed a nearly infinite pageant of gods, spirits, and heroes. The idea of blending ethical philosophy with religion would also have seemed strange, maybe even a little bit crazy, to most Greeks and Romans, whose gods and priests had little say to about how humans should behave toward other humans. Moreover, Christianity’s emphasis on an afterlife might have seemed rather superstitious to people who mostly had only very vague and fuzzy notions about such things. Ehrman points out that many Roman graves of the era had an inscription that was as familiar to them as R.I.P. would be on our tombstones. It often read simply N.F.F.N.S.N.C., standing for Non Fui, Fui, Non Sum, Non Curo, meaning I was not, I was, I am not, I care not. Many modern secularists may share a similar notion today, expecting no more cares after death than before birth.

But some of Christianity’s oddities might also have made the religion attractive. An afterlife that included rewards in heaven could have appealed to a large portion of the population, whose lives were often hard. The possibility of punishments in hell, coupled with the claim that a final judgment was near at hand, added a sense of urgency. More than most of the religions of the empire, Christianity claimed to offer a plan, a method for getting that heavenly life ever after. Ehrman emphasizes, too, the importance of miracles in persuading many of the validity of the new religion. Miracles then, Ehrman suspects, were much the same as miracles today, meaning that most of the people who believed in miracles never experienced one personally nor witnessed one directly. People hear about miracles that happen to other people, and some come to believe those miracles are facts, and are persuaded by them. Miracles, or at least stories about miracles, were a major selling point of early Christianity.

One common understanding that Ehrman tries to dispense with is the notion that the Christianization of the Roman Empire required repeated conversions on a massive scale. Of course no solid numbers are available. But reasonable estimates of the population of the empire and the numbers of Christians at different points in time tell a story that is distinctly non-dramatic. The shift from tiny minority to clear majority took several centuries, and could have been achieved at an average growth rate in the range of 3% to 4% per year. That is, each group of 100 Christians had to increase their number by 3 or 4 persons every year, something that could easily result from converting a single family. That doesn’t sound like much, but like compounded interest the growth curve is exponential over time. Ehrman makes a strong case that a modest growth rate, sustained mostly by one-on-one, face-to-face communication, continued over several centuries, converted a vast empire.

The Triumph of Christianity: How a Forbidden Religion Swept the World, by Bart D. Ehrman (Simon and Schuster, 2018), is currently available in hardcover, ebook, and audible editions.