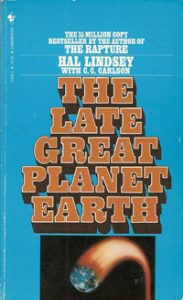 I was rummaging through the “everything must go” sale at the closing Borders store on St. Charles Ave., and stopped in my tracks when I spotted a copy of Hal Lindsey’s The Late Great Planet Earth. I remembered reading the book – a detailed interpretation of how Christian End Times prophecy will play out – when I was a teenager. The book was cast in terms so tightly bound to the social and political tensions of 1970 that I would have thought it thoroughly discredited and forgotten by now. Yet there it was, a shiny new copy in a mainstream bookstore. Who would publish such a thing in 21st century, and more importantly, who would buy it?

But certainly not just me. This book was a “bestseller of the decade,” and the current cover claims “over 15 million copies sold.” It is frequently cited, and has broadly influenced apocalyptic movements in the U.S. and elsewhere for more than 40 years. Author Hal Lindsey has had success with this and other books, as well as with his Television ministry. Now over 80, he is still writing, preaching, and interpreting End Times prophecy. His Hal Lindsey Reports program can be seen on cable, his web page, and on YouTube. He is the first to admit that his interpretations of prophecy may be fallible, but also claims to have a special gift for interpreting biblical prophecy.

And interpret he does. Knitting together disparate texts from Hebrew and Christian scripture, and tossing in a good bit of anti-modernist angst, Lindsey explains how he thinks the world will end. Soon. Interest in drugs, witchcraft, and astrology will continue to grow, as will apostasy within mainstream Christian denominations. At some point not too far off, the minority of Christians who have managed to hold on to the true faith will be taken into heaven, an event known as the Rapture, so they can avoid a 7-year period of Tribulation that is destined to follow. The Antichrist, a great leader somehow arising out of the revived Roman Empire (the European Union) will help Israel secure peace and rebuild the Jewish temple on Jerusalem’s Temple Mount (now occupied by the Islamic Dome of the Rock). But this peace will fall apart after 3-and-a-half years. A northern confederacy led by Magog, which Lindsey identifies as Russia, will ally with a confederacy of Arabs and Africans to attack Israel. Russia will double-cross its allies, attacking many of them, including Egypt. Red China, as Lindsey calls it, will launch an army of 200 million, which will march across the dried up Euphrates river to enter the fray, and the Antichrist will lead a European counter-strike. The book includes maps that illustrate the various phases of amphibious and land assaults, and hedges only slightly when betting that nuclear weapons will be used.

Humanity will come close to destroying itself, but God will intervene. Christ will return, and will reign with all true believers for 1,000 years. At the end of that time, in spite of the near perfection of the Millennium, some humans will still rebel against God, with Satan’s help. There will be a final destruction of all evildoers before God creates a new heaven and earth.

In some ways, the book still works in 2011. Lindsey was sure in 1970 that the End was near at hand, but avoided stating specific years, so his interpretations haven’t yet expired, at least not technically. The underlying biblical texts, of course, have not changed, and ordinary Christians, especially those of a fundamentalist bent, still feel that the modern world is in some kind of spiral into decadence. His prediction that the US will not be a major player in the final battle because its international power will wane seems even more feasible now than it did then.

In other ways, the glaring datedness of the book is impossible to ignore. Lindsey was clearly reacting to drug use, rising interest in eastern religions, and experimentation with the occult, aspects of the counter culture of the 60s that still exist, but are no longer so salient. He was reacting to godless Communism, which was still a credible threat in 1970, but is now a completely dead issue. The specter of nuclear holocaust still exists, but most of us no longer feel that our entire species is on the brink of self-annihilation, a fear that seemed all too real in 1970. And the whole idea of world-wide obsession with Jerusalem has become quite stale. It was conceivable, in 1970, that the entangling alliances of cold-war politics could drag the whole world into a conflict originating among smaller players in the Middle East. But in 2011 it is difficult to imagine all the great powers of the world converging on a plain in central Israel just to blow each other up.

While those of us with a more secular view might tend to assume that apocalyptic fervor is a declining feature of American culture, here is evidence to the contrary. The Late Great Planet Earth is still in print, Hal Lindsey is still on TV, and he’s not the only one. Harold Camping’s followers are still caravanning across America to proclaim the Second Coming on 21 May 2011, while televangelist Jack van Impe still leans toward 21 December 2012, to name but two more. These three have mutually exclusive ideas as to how our world will end, but they’re all getting air time. There must still be plenty of money to be made by hawking the End of Days.

Note: some online reviews imply that the contents of this book have been altered over the years, even though the copyright date remains 1970 and no revised editions are indicated in the publication data. I found a copy printed in the 80s, and saw no obvious differences between it and my circa-2011 copy. If anybody has a copy that was printed with some certainty in the early 1970s, I’d love to take a look at it.