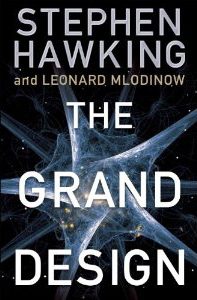 By Stephen Hawking and Leonard Mlodinow

Perhaps you are one of the lucky few who is naturally gifted with mathematical genius or at least has advanced training in the field. No? Me either. I think I understand that our reliance on energies such as light to observe the universe around us places limits on what we can know about the sub-atomic realm, yet it often seems to me that physicists take a little too much pleasure in emphasizing the mysteriousness of the quantum.

Nevertheless, I cannot help but be curious. After all, physicists seem to be investigating the very nature of reality and knowledge, pressing the boundaries between philosophy and observational knowledge.

So I’m always looking for experts who are willing at least to try to explain their insights to those of us who don’t “just get differential calculus.” To that end, I have to say that I thoroughly enjoyed The Grand Design, a 2010 publication by Cosmologist-Mathematician-Physicists Stephen Hawking and Leonard Mlodinow.

In a scant 200 pages, Hawking and Mlodinow attempt to give us non-specialists some grasp of the latest synthesis of theoretical physics, the somewhat poorly bounded M-theory. This is an entry into the counter-intuitive realm of sub-atomic particles whose paths through space seem to take on specifics only upon being observed, of quarks and multiverses and forces operating in eleven dimensions, and the on-going quest for a unified way to understand gravity, electro-magnetism, and the strong and weak nuclear forces.

Of special interest to the secularist is the author’s confidence in the comprehensible and law-driven nature of the universe. They explain that idea that there are multiple universes is not just a fudge factor made up by non-believers to explain away the need for a creator. Rather, the likelihood of multiple universes is directly implied by the nature of physics as it is now understood. And the possibility or even probability of multiple universes takes physics into discussions once reserved for philosophers. Hawking and Mlodinow break with Stephen Jay Gould’s optimistic view of science and religion as “non-overlapping magisteria,” and dare to ask why there is something rather than nothing, why our universe has the particular physical laws it has, and why we humans exist.

The answer explained in The Grand Design is that the an entire universe, including the one we live in, can consist of positive and negative energies that net to zero. This being the case, multiple universes are as likely to pop into existence as none. The possibility of multiple universes pulls the rug out from under “fine tuning” arguments in favor of an intelligent designer, because various universes could each have different sets of physical laws. We just happen to inhabit this particular one of many, since humans, or beings like us, exist only in those universes with physical laws biased in favor of producing such life forms.

M-Theory is not in the same class as gravity, evolution, or the heliocentric model of the solar system. M-theory is still a hypothesis, a theory with a lower-case “t”. In spite of this, it is fascinating to see how physicists grapple with some of the same epistemological problems faced by philosophers. The position of at least these cosmologists closely parallels that of some philosophers, who say that human existence and the array of physical laws that characterize our universe are “brute facts” that simply have to be accepted.

For 500 years science has been steadily reducing the arenas within which a deity might operate. In The Grand Design, Hawking and Mlodinow make it clear that there simply is no such arena. On page 165 they write:

“Many people through the ages have attributed to God the beauty and complexity of nature that in their time seemed to have no scientific explanation. But just as Darwin and Wallace explained how the apparently miraculous design of living forms could appear without intervention by a supreme being, the multiverse concept can explain the fine-tuning of physical law without the need for a benevolent creator who made the universe for our benefit.”