BOOK REVIEW: Society without God: What the Least Religious Nations Can Tell Us About Contentment 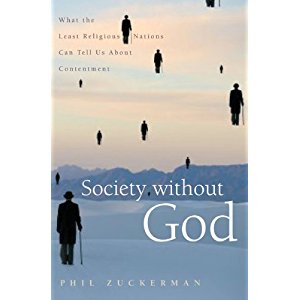 Is it possible to live a good, moral life and not be religious? Of course, it is, claims the author of this book! Phil Zuckerman spent a year living in Denmark with jaunts over to nearby Sweden to interview hundreds of Scandinavians about their religious beliefs.

What he discovered first and foremost is that the Scandinavians view religion as a private matter. What one personally believes about god and religion has absolutely no impact on other people’s lives and is hardly ever discussed. By contrast, Americans tend to wear their religion on their sleeves, as a type of badge of a sign of one’s personal virtue. The author goes into explicit details and offers explanations how America became a place of high, ostentatious religiosity while places like Denmark and Sweden became places where citizens regard their personal beliefs as just that, private.

Consider this. Denmark and Sweden are towards the top of the list in all these categories: low poverty rates, low crime rates, low teenage pregnancies, low abortion rates, high educational levels, low STD’s, just to name a few. America, being a “Christian nation” as some claim and with its overt religiosity, should also top thoses lists. It doesn’t. What does that say about the power of religion in America?

What struck me also in this book is the last chapter where the author explains the cultural differences between Americans and Danes, and how this affects how each group sees religion. He interviewed a religious Danish friend who came to spend a year in America. What is ironic is that this religious Dane was appalled by the religiosity of Americans, the “in-your-face” religion: from TV preachers, to billboards luring people to church, to politicians desperately trying to prove to you they are “America’s best Christians,” etc. This book is a very interesting read.