BOOK REVIEW: Godless: How an Evangelical Preacher Became One of America’s Leading Atheists 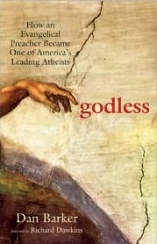 Dan Barker is a wonderful writer, and writes in such a clear and very comprehensible manner … and he is often funny! He was a “You need to come to Jesus!” evangelical preacher for 19 years, so he knows the arguments religionists use to defend everything from “The Bible is the word of God” to “Atheists are immoral and have no meaning in their life.”

His story of how he went from blind faith as a preacher to a humanist using his mind and reason is fantastic. Dan says “I finally realized that faith is a cop-out, a defeat — an admission that the truths of religion are unknowable through evidence and reason.”

Here are some of my favorite quotes: “We atheists believe in life BEFORE death. Before we were born, there was a very long time, perhaps an eternity when we did not exist, and it did not bother us one bit. The same will be true after we are dead. What matters is that we are alive NOW.” Given this, he says that “Atheism actually enhances the value of life” instead of living for some uncertain better after-life in heaven. I love what he says about religious hell: “Hell is an incentive to a phony morality.”

In other words, if the only reason you want to be a “moral” person is that God is threatening you with hell, what kind of morality is that? Dan says “Be good for goodness sake!” A great read for all those interested in reason with respects to religion.