BOOK REVIEW: Dinosaurs of Eden: Tracing the Mystery Through History 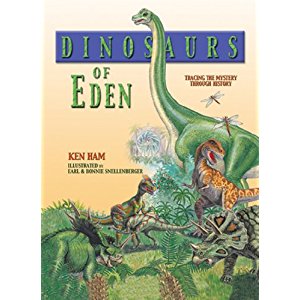 I hadn’t noticed this particular bit of creationist schlock until somebody posted a page of it on Facebook. I just couldn’t resist, and bought myself a used copy, purely for its entertainment value. Dinosaurs of Eden, is an attempt to assure young people that science has it all wrong. It was written by Ken Ham, president of Answers in Genesis and its subsidiary, the Creation Museum.

The book is short and illustrated in order to appeal to children or younger teens, although the text is a bit dense for that age group. One suspects that many of the readers would be older teens and young adults whose scientific education has been minimal. Some of the pictures show Adam and Eve playing with dinosaurs in the Garden of Eden, dinosaurs on Noah’s ark, humans riding dinosaurs and using them as pack animals, and even a pair of dinosaurs fighting in a Medieval European village, whose residents called the beasts “dragons.”

The text assures the reader that God created the world about 6,000 years ago, in 6 days of 24 hours each. Humans and dinosaurs must have co-existed, since God created both on the same day. A flood submerged the entire world about 4,500 years ago, creating most of the fossils and many of the geological features we see today. Saved on Noah’s ark, dinosaurs survived the flood and might still live today, given the occasional report of giant beasts in remote jungles and the discovery of “fresh” dinosaur bones in Montana. Scientists don’t have complete information, so they’ve “had to make guesses” about what happened in the past. Why do they cling to Evolution rather than Biblical truth? ?The answer is that scientists, like everyone else, are sinners. Because of this, they don?t want to believe. It has nothing to do with the evidence.? Believers, on the other hand, have the Bible, which “does tell us all we need to know about the events of the past,” and is the only 100-percent accurate history book in the world.

This would be laughable, if we could forget that the book was deliberately written to damage the critical thinking skills of young people.