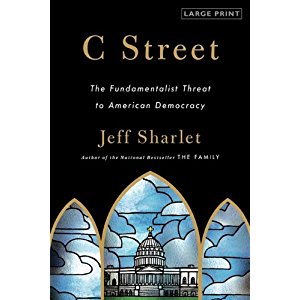 This book is fascinating and a fast read. I finished it in four days. The book is divided into six chapters, each focusing on a different goal of “The Family,” the group of fundamentalist U.S. Senators and Representatives, and others, who meet in a house on C Street in Arlington, Virgina, to study the Bible and talk about how to influence domestic and international politics with “the teachings of Jesus.”

The chapter on the proselytization of Africa is most disturbing. The Family uses their power and clout as U.S. Congressmen to promote their brand of Christianity throughout Africa, but in a way they wouldn’t dare try here in the States. What is an example of their fruits? Uganda proposed an “Anti-Homosexuality Bill” in early 2010. David Bahati (a Ugandan, educated partly in the U.S. and good buddies with several in The Family) is its main sponsor. The bill suggests the death penalty for all gays and jail time for those who “know of” a homosexual and do not report this to the authorities. When word of this atrocious bill got out, the American Congressmen and the fundamentalist preachers who had ties to Uganda, most notably Rick Warren, tried to weasel their way out of connections to this Death Bill, claiming that this is not what they had in mind when they went proselytizing Africa.

Another chapter, also disturbing, is the one on the Christianization of the U.S. military. Just recently, some soldiers in Virginia refused to attend a Christian music concert, and for that, they were told they had to stay behind and clean the barracks. An atheist friend of mine, a retired Marine, told me about how he was treated when the rest of the troops went off to church services on Sundays. He was allowed not to attend church services, but had to stay behind and clean the barracks. With such examples, with more in this book, the U.S. military is constantly in violation of our secular U.S. Constitution, but they are able to get away with it so often. When the U.S. is abroad fighting wars, such unconstitutional insertion of (Christian) religion into our military makes us look like we’re on a Crusade to wipe out the non-Christians. Remember George W. Bush’s frequent use of the word “evil” and “bad guys”?

This is actually a recent phenomenon in the military, since maybe the 1960’s or early 1970’s. Before that time, religion among soldiers was a completely private matter. What you believed was your private business. Today, as with many other aspects of American life, politics in particular, the military feels the need to wear religion on its sleeve.

Will we ever be able to separate Church and State as the founding fathers intended?

We shall see what the future holds as the struggle to keep our government secular continues.