BOOK REVIEW: Breaking the Spell: Religion as a Natural Phenomenon 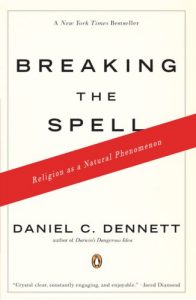 There are few times in my life where I’ve experienced “revelation.” Not in the religious sense, but in the sense of scientific enlightenment.

Even though my education and career is in engineering, I’ve made it a point to become familiar with the science of evolution. However, I’ve always unknowingly limited my learning to the perspective of biological adaptation. Dennett’s book brought the realization crashing home that our brains and therefore our thought processes are just as much a product of evolution as being bipedal or having opposable thumbs.

Furthermore, just as it is inevitable that other species want to use us for food, shelter, and propagation, (rats, cockroaches, tape worms, to name but a few) exactly the same is true for our brains. Using Dawkins’ principal of memes that was proposed in The Selfish Gene, (1976), (memes are analogous to genes, in that they’re cultural ideas or patterns of behavior that are passed from one person to another, or “replicated” by non-genetic imitation), Dennett defines religion as a natural phenomenon that has evolved to take advantage of natural cognitive thought mechanisms. Just as a forest of trees has crawling plants, woodpeckers, and burrowing insects, why wouldn’t a “forest” of six billion human brains have its own parasitic infestations?

Dennett is the most accommodating of the original New Atheists in that he bends over backwards to the theistic reader. This will be a point of irritation for an atheistic reader. The first several chapters of the book are Dennett proposing theistic ideas and then saying, “You may be right, but let’s take a look and find out?” The obvious intension of this intellectual “tickling” is to draw theists in to consider his reasoning. This becomes obvious in later chapters where he lays down his well thought out arguments. But even then, there are numerous appeals to the theistic reader for intellectual honesty in an attempt to prevent having his half-read book thrown in the trash.

One practical recommendation he makes is the compulsory teaching in public schools, private schools and even home schools of other major religions. He proposes that if we educate our children about the creeds and customs, prohibitions and rituals and the texts and music of alternate world religions they’d be able to make a more informed choice. As a product of the British school system, I couldn’t agree more! I had a class called Religious Education and I can remember the teacher explaining that “in this part of the world people believe this, and in that part of the world, people believe that”! It was as bizarre to me then as a 12-year-old as it is to me now. He goes on to challenge theistic parents that if they have a problem with this, then what they’re actually saying is that they want to keep their child living in ignorance. Who can argue with that?

His conclusion, which is a big pill to swallow for the religious, is to “break the spell” of religious reverence and analyze belief as we do in the pharmaceutical industry, the petroleum industry or any other world influencing organization. Religion has built a social wall of defense against scientific inquiry that, if attempts are made to breach it, the results vary from mild disapproval to hostility and even violence.

There was a time when it wasn’t illegal to drink and drive a motor vehicle. Way back then, the inevitable accidents were blamed on the alcohol as opposed to the individual. Can you imagine a world where the inebriated were not just overlooked but socially revered? This book helps us to see the problems caused by untested religious belief in modern society from the same lens.