BOOK REVIEW: Battle for the Mind: A Subtle Warfare 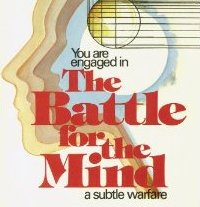 Many NOSHA members will recognize Tim LaHaye as the (in)famous co-author of the Left Behind series, more than a dozen works of speculative fiction about what might happen on earth between the Rapture and the Second Coming. Fewer of us may be aware that LaHaye is also a prolific writer of non-fiction with a Christian bent. Recently, I’ve had the pleasure of teaching a course in the anthropology of Magic, Witchcraft and Religion, and in an effort to include the modern, fundamentalist, Christian perspective, I’ve required my students to read one of LaHaye’s serious works.

Battle for the Mind is both Christian apologetics and a call to political and social action. It was first published in 1980, just as the relationship between the Republican Party and the Religious Right was shifting from platonic to sexual. Paralleling the development of that religio-political movement, the book was repackaged and re-released in 2000 with a new title: Mind Siege: The Battle For The Truth. I use the 1980 edition in my class because I find it to be a more honest statement of the fundamentalist perspective, and because it is out of print, so we can buy used copies without putting money in the author’s pocket.

Battle for the Mind is either dishonest or ignorant in its treatment of historical and scientific facts, but is quite honest in one important regard: it plainly states that it promotes a theistic view in opposition to the modern, materialist, humanist worldview. As LaHaye puts it, “most of the evils in the world today can be traced to humanism,” (p. 9) and “humanism ultimately destroys everything it touches” (p. 43). To save America from itself, Christians must “remove all humanists from public office and replace them with pro-moral political leaders” (p. 10).

LaHaye’s summary of humanism is reasonably accurate from a religious perspective: it’s “man’s attempt to solve his problems independently of God” (p. 26). But from that point on he spin-doctors the facts. He claims, for example, that humanism is itself a religion, and its “five basic tenets” are atheism, evolution, amorality, autonomous self, and a “Socialist one-world view ” (p. 57). He describes humanist ideals by quoting from Humanist manifestos I and II, and at length from Corliss LaMont’s The Philosophy of Humanism, selecting the passages that seem most scandalous to him. This ploy really doesn’t work, at least not on the astute reader, who can’t help but wonder what’s so bad about legal equality for all, an unfettered right to read, or a freedom of religion that includes the freedom from religion.

LaHaye is at his weakest when he tries to undermine the historical and scientific bases of humanism, and some of his abuses of the facts go beyond ridiculous. He asserts, for example, that “our unique check-and-balance system of government would never have been conceived by humanism. It is borrowed directly from scripture” (39). Oddly, for an evangelist, he fails here to cite chapter and verse. He claims that somehow Christianity is scientific and humanism isn’t, that technological progress is somehow dependent on knowing that the universe runs according to divinely established rules, and that “atheistic humanists, obsessed with unguided and continual change, would have had us back in the Dark Ages, where they were still attempting to trial-and-error their theories” (101). It isn’t clear whether LaHaye himself doesn’t know, or just hopes his readers don’t know, that the Dark Ages were dominated by a Christian worldview, that subsequent scientific and technological progress depended on methodological materialism, or that the U.S. Constitution is firmly based in the non-theistic philosophy of the 18th-century Enlightenment.

All too typically, his challenges to Evolution rely heavily on making it appear that some solidly evolutionary scientists had more doubts than they actually had. For example, on page 61 he quotes from D’arcy Thompson’s On Growth and Form, a seminal work in mathematical biology. The quote contains two elisions (properly marked with dots), with the result that the reader gets the impression that Thompson had serious reservations about Darwin’s theory. But checking Thompson’s original text, it is instantly clear that Thompson has no such doubts, and that the elided material was critical to understanding that.

In fact, within two pages of the material quoted by LaHaye, Thompson explicitly states that his observations are “no argument against evolutionary descent” (p. 1094, in the edition of 1948). We might be tempted to let LaHaye off the hook on this point, since he actually took the Thompson quote from a third source, a book titled Secular Humanism: The Most Dangerous Religion in America, by Homer Duncan (in other words, it was Duncan who first fudged what Thompson wrote, and LaHaye is just copying that fudge uncritically). Not checking the original source, though, is sloppy technique at best, whether we judge LaHaye’s writing as academic or journalistic.

The 2000 rerelease has been significantly restructured, but is still stridently anti-humanist. In the 1980 edition he predicted that the 1980s would be decade of battle over religious rights and that basic freedoms would be lost in America by the year 2000. Any mention of these or other inconveniently dated predictions have been dropped in the 2000 edition. Gone too are the lengthy quotes from Corliss LaMont, apparently recognizing that they made humanism sound too appealing. These have been replaced with quotations from conservative columnist Cal Thomas, and occasionally even Anne Coulter, although I am at a loss to explain how LaHaye thought these would help his case. And even though they had twenty years to look it up, the 2000 edition still has the misleadingly doctored quote from D’arcy Thompson.

One important improvement is that the 2000 edition gives us a chapter and verse to support the claim that the U.S.system of government is biblical. For this LaHaye cites Isaiah 33:22, although he doesn’t quote it, and I can only imagine that he hopes nobody looks it up. It’s a stretch, but that verse can be interpreted as at least mentioning three branches of government: “For the Lord is our Judge, the Lord is our lawgiver, the Lord is our King; He will save us.”